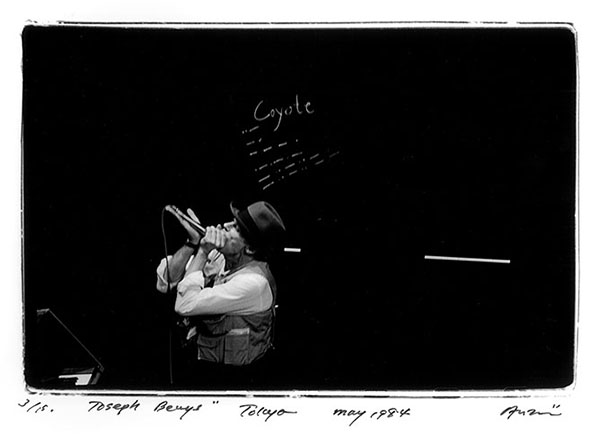 To coincide with the next Fitzrovia Lates, White Rainbow is pleased to announce a collaborative performance between Patrick Coyle and Jenny Moore, in response to White Rainbow’s current exhibition, Index II, by Shigeo Anzaï.

Coyle and Moore will stage an improvised performance in response to a 1984 performance in Tokyo by Joseph Beuys and Nam June Paik, as documented by Anzaï.

The original performance, Coyote III with piano variation, was a duet between the two artists. Nam June Paik improvised on piano while Beuys conducted a vocal performance that varied from animalistic grunting to sophisticated sound poetry. The only onstage decoration was a black board on which abstract chalk marks were written, resembling morse code; Beuys added to these markings with textual writing as the concert progressed.

Beuys and Nam June Paik set an alarm for one hour before the performance time, and went on stage with little fixed idea of what they would do. Coyle and Moore will also work within the constraints of the original one-hour framework, improvising as the performance unfolds.

White Rainbow is also delighted to announce the publication of a new monograph on Shigeo Anzaï. Titled Index, the book contextualises Anzaï’s career as a celebrated recorder of contemporary art.