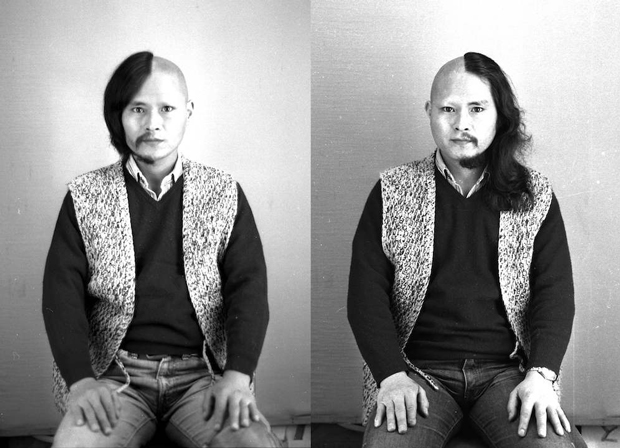 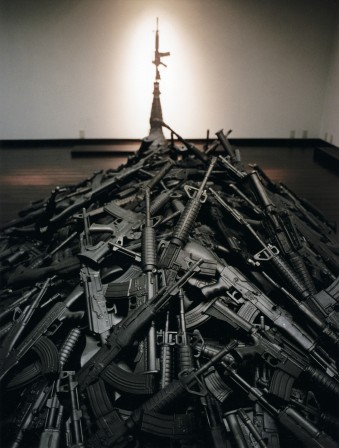 Chu Enoki, We Captured a Small UFO at Last!

White Rainbow is pleased to present Chu Enoki’s first solo show in Europe.  A seminal figure in contemporary Japanese art, Enoki’s work has influenced younger artists. Since the millennium, Enoki has received increasing acclaim and is now considered one of the  most significant artists working in Japan, yet he is still not widely recognised internationally. This exhibition will show the variety of his practice from pioneering performance pieces of the 1970s, which react to the societal upheavals of post-war Japan, to the later sculptural works made with deactivated guns and cannons.

Chu Enoki (b.1944) began his artistic career in the 1960s with no formal art education. Just after the war, when he was still a child, Enoki would go to the forest and find used gun cartridges to melt, and would re-shape the metal. When he  left school at the age of 16 he began using skills learnt working for his relatives’ factory in Kobe. In his twenties he formed Japan Kobe Zero, a collective that staged happenings and interventions in public spaces, which he remained in until 1976.

A highlight of this exhibition will be a photographic record of the pioneering performance piece Going to Hungary with HANGARI (1977). Inspired by Marcel Duchamp’s act of shaving a star shape into the hair of his head, Enoki made  this piece when he travelled to Hungary after his departure from the Japan Kobe Zero group. A play on words (in Japanese the word hangari means ‘half-shaved’), Enoki shaved all hair from the right side of his body, and was stopped by police numerous times due to his appearance. The exhibition also presents Chu Enoki’s exquisite, previously unseen drawings.

White Rainbow will present two examples of Chu Enoki’s work with de-activated weapons. AK-47/AR-15 (2000–03) is a series of sculptures of Kalashnikov and Colt guns. The individual elements are more than twice the weight of the real guns and by uniting American Colts with Russian Kalashnikovs the work inevitably references the Cold War. Once envisaged as an ongoing series, Enoki abandoned creating the objects on the commencement of the Iraq War in 2003. Following the constant reminders of the fear of war, and the justification for it in the media, Enoki commented ‘the actual event transcended my work’.

In addition, Salute C2H2(2009) will be on display, one of a series of life-size cannon replicas that the artist has created throughout his career. Attracting attention in the media and from the police, Enoki had to endure an official investigation, after which he received a permit from the local police agency allowing him to use the cannons as an art project. Today he still uses the works for performances at exhibitions, art events and even wedding ceremonies, where he has been known to fire flowers from them.

After the millennium, Enoki  received increasing recognition for his work. Although his reputation was already established, several major shows since 2004 have brought him to a wider audience, with the major Japanese survey show Roppongi Crossing (Mori Art Musem, 2007), the dialogue show, Gyu and Chu, (Toyota Municipal Museum, 2007) and Enoki Chu: Unleashing the Museum, (Hyogo Prefectural Museum of Art, 2011) consolidating his presence as a significant figure in contemporary Japanese art.

This show is curated by Kodama Kanazawa, independent curator.