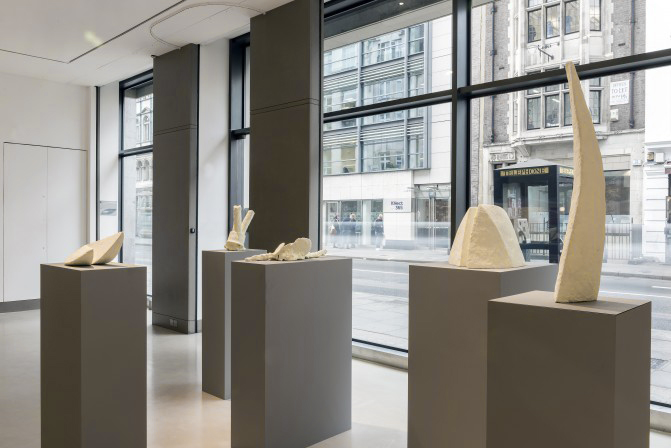 Lüscher’s work revolves around everyday objects, experiences and impressions from her immediate environment. Besides objects and installations, this has also yielded photography, paintings, texts and – since the 1990s – video art. The artist frequently produces serialised work.

Lüscher rose to prominence in 1972 for her installation at Documenta V, curated by Harald Szeemann. Since then, Lüscher has participated in Documenta IX (1992) the Venice Biennale (1980, 1999, 2001) the Gwangju Biennale (1997) and the Lyon Biennale (1997). Lüscher’s work is well known in Europe, and she has exhibited at ICA, London, the Stedelijk Museum, Amsterdam, and the Reina Sofia Museum, Madrid, among many others.

For her first exhibition at White Rainbow, Lüscher will exhibit a range of paintings and sculptures made with sulphur and ash – the artist’s main production during the late Eighties and early Nineties.

The polarities of light and darkness have often characterised Lüscher’s work, and the artist works with sulphur and ash as metaphorical allusions. The brilliant yellow colour yielded by sulphur dust brings the artist as close as possible to handling light itself. But Lüscher tempers this brilliance with the thick blackness of ash, frequently placing both natural materials side by side in her work. Lüscher uses ash to lend a greater intensity to the black, in order to try and match the strength of sulphur. The grainy quality Lüscher achieves in mixing both ash and sulphur pigments into the acrylic paint lends the paintings strong texture, in turn highlighting different shades and movements.

Lüscher frequently draws from the natural world, and, in this series, the artist seeks to conjure the physical sensation of fire without experiencing it visually. Utilising the sulphur, as well as ash – that which remains after a fire – Lüscher stages a dance between the moment of ignition and extinguishing. The artist sees these elements not simply as oppositional, rather as forces that can be reconciled. In turn, Lüscher highlights how fire can be both generative (of energy, heat and light) and destructive.

Lüscher reconstructs this natural process, but in doing so distorts a sense of time. Alongside a series of organic smaller sculptures covered in sulphur dust, Lüscher shows seven geometric paintings, evocative of Barnett Newman’s Stations of the Cross series. Lüscher constructs subtle alterations in their viewing condition but utilising different proportions of sulphur and ash in each. When seen together, the works construct an almost photographic snapshot of the process of combustion: from ignition through to the fire’s aftermath. But Lüscher highlights that this is not a true representation, and posits the experience as elusive. In this somehow alchemical series, the very absence of fire itself becomes clear.