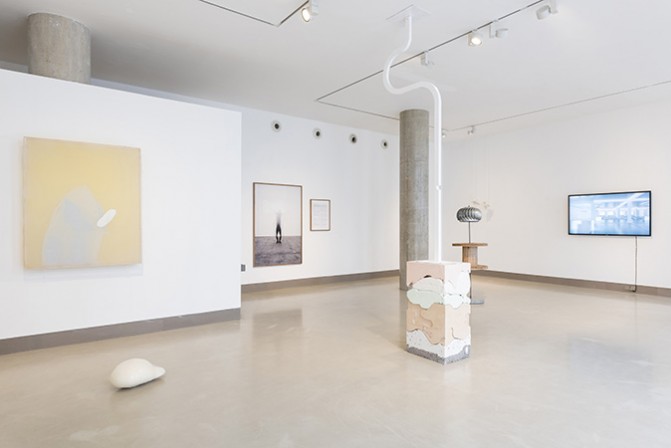 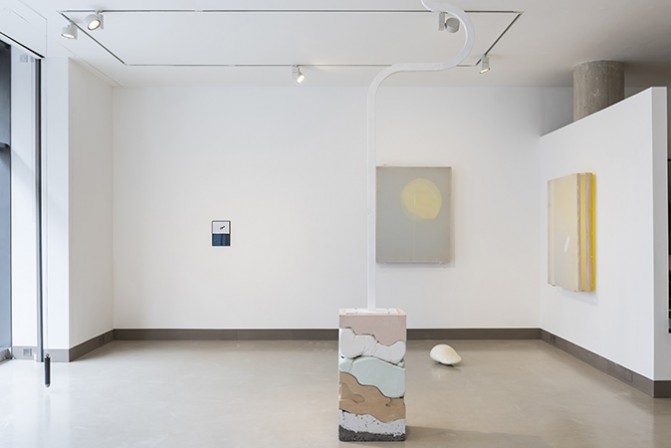 White Rainbow is pleased to announce Lightness, a group show that explores the notion of weightlessness, or how artists reconfigure material to distort physical properties. This might play out through juxtapositions of material which somehow alter the density of an object’s final form; a sense of gravity may become disrupted through camera work or installation. Many of the artists, in their explorations of material, also play with how our experience of objects can be choreographed or confused.

Holly Hendry’s sculptural practice investigates the underneath and backsides of things, bringing together disparate materials to reveal their soft side. Felix Kiessling’s research-driven work explores the sensory effects of gravity on the human body, while sculptor Charles Harlan works with earthly, weighty and industrial materials including steel and stone to isolate archetypal forms within the constructions that surround us. Ittah Yoda’s abstract paintings and sculptures combine physically rigid materials such as metal and marble with softer, more pliable elements like wax and silicone. In Alexandra Navratil’s 3D Animation, the camera moves through a series of interior spaces within generic semi-public architecture, in which reflecting surfaces and indirect light create a world without shadows or gravity.

Lightness takes its cue from Italian writer and theorist Italo Calvino’s ‘Six Memos for the Next Millennium’, in which he explored six values which he felt would be important for the coming millennium. ‘Lightness’ was the first such essay. Calvino wanted his writing to be deft, nimble – light – but the surrounding world proved increasingly heavy. He viewed lightness as a positive formulation, as a springboard for allowing oneself to rise above the weight of the world.

The five artists brought together in this exhibition propose sculptural and physical manifestations of this will towards lightness, without necessarily invoking a value judgment on the term.